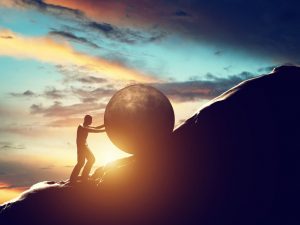 For centuries, an enormous clay statue of the Buddha sat in Wat Traimit, a temple in Thailand. Its origins unknown, it had become something of a fixture. The temple monks would tend the statue, fixing cracks appearing in the clay as it dried in the heat. One day a monk was repairing a particularly large crack and, peering into it, found a golden reflection. When the monks pealed back the layers of clay, a statue of solid gold that had been hidden away was revealed.

Buddhist psychology starts with the premise of basic goodness. We enter into the world in a state of perfection, or basic goodness, and remain that way until we leave it. While this may be the premise, things get murky because, in response to the wounding of our human experience, we lose sight of that basic goodness. It gets lost beneath the layers of coping, defensiveness—and, in some cases, dysfunction—we develop in order to survive, both personally and socially. Peeling back those layers and revealing our authentic self, or awakened heart, also means exposing our most vulnerable self.

Surfacing our demons, digging deep into our neuroses, exploring our habit patterns and challenging our belief systems comes at a cost. Yes, we are closer to our true nature. Yes, we are more authentic. Yes, we are more vulnerable. We also become, to some degree, more defenseless, because we’ve given up our survival tools. The layers of existential clay covering our personal Golden Buddha define our rapprochement, or way of being in the world. With those layers peeled back—or even just thinned—we no longer have access to our past means of navigating our experience. Instead, we find ourselves needing to re-learn how to be in the world, as well as how to continue to survive in it.

One Step Forward, Two Steps Back

John was angry. When he was finally confronted with deconstructing his anger, he discovered it came from fear—his fear of doing something wrong. He eventually realized his apprehension and resentment were grounded in a childhood narrative of less-than, which had shaped him into a perfectionist. His perfectionism, however, wasn’t just a garden variety kind of perfectionism, which involved the crossing of t’s and dotting of i’s. It was a paralyzing perfectionism often preventing him from even getting out of the gate, never mind crossing the finish line.

Releasing his perfectionism allowed John to embrace his humanity, but it also meant releasing his resentment and, by association, his anger. The question then became, if he wasn’t the angry guy, who was he? More importantly, with his survival tools no longer in place—or, at the very least—diminished, how was he supposed to operate in the world? 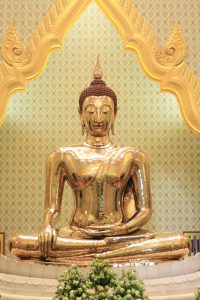 John’s experience represents one of the fundamental paradoxes of personal development. Our growth is sometimes regressive. In peeling back our layers of coping, defensiveness and potential dysfunction—and returning to our authentic selves—we are going back to our beginning. That doesn’t mean returning to some state of infantile helplessness, but, rather, returning to the point where our original wounding ultimately coalesced into the touchstone of our personal Clay Buddha.

The construction of the Clay Buddha is different for everyone and, unlike trauma, isn’t an all-at-once kind of experience. Rather, it’s something that comes in bits and pieces, building up over time. There is a point, however, when our existential armoring becomes fully realized and, for those on the path of awakening—whether forced or chosen—that is the point at which we must start.

For John, his starting point was the death of his father. His slowly constructed narrative of ‘less-than’ had been roundly reinforced by a life-long experience of having everything done for him, where the message he got was if he did it for himself, he wouldn’t get it right. When his father died, not only was he not pragmatically equipped to do for himself, he also didn’t feel he could figure it out on his own—because, in his mind, he’d surely get it wrong.

Rather than stepping into his power, surfacing and embracing his Golden Buddha at the outset, over time John, like many of us, consistently fell back into his ‘normal’—his narrative and the safety of his Clay Buddha—seeking out situations and relationships that would support his sense of helplessness and lack of power. Later in life, when he was forced to confront his anger, John was also forced into returning to his starting point.

Returning to the Clay

The spiritual teacher Ram Dass is often heard to quip, ‘Yeah, I flunked the course—again—and had to start over’. His words express not only our human frailty, but our humanity. Unawakened to our authentic self, we tend to repeat our patterns and often, quite literally, have to go back to the drawing board. How many times have you found yourself in a place where you have a momentary distance from your circumstances and remark, ‘Well, here I am again—how in the world did that happen?’ It happens because we return to the clay. We fall back on what we’ve learned—and, so, believed—would protect us, and help us survive.

Just as the Clay Buddha was constructed to keep the Golden Buddha from looters, we build up our own clay—our layers of coping, defensiveness and dysfunction—to protect ourselves from those who would steal us from ourselves. Therein lies another paradox: the very thing we believe is protecting us is keeping us from our true selves—our basic goodness, and awakened heart. It is also keeping us, not only from our lives, but from our aliveness.

To live authentically, we must be present. If we are mired in the clay, instead of shining through it, we are not present. Not only are we not with the people around us who make up our sangha, or community—even if it is a sangha of one—we are not with ourselves.

Self-relationship is one of the most important aspects of our humanity, and self-relationship starts with self-awareness. If we are unaware we are falling back on our Clay Buddha—or just too lazy to confront our personal bullsh*t—we are lost to ourselves. When we awaken to the patterns of behavior keeping us hidden and ostensibly safe, glimpsing the possibilities of our basic goodness, we also awaken to the possibility of who we are.

Releasing the tools of coping, defensiveness and dysfunction having served us—and which have, simultaneously, done us a disservice—is how we get there, no matter the discomfort that choice encompasses. This is no easy task. In fact, its genesis is Sisyphean, with us repeating our patterns literally to no end, but it can be—and is—in fact, Promethean—being true to ourselves and suffering in the wake of our decision to do so.

So, do we choose to repeat our task endlessly and to no end, or do we release the self-imposed rules of our personal narrative and work through the pain we create for ourselves in service of our awakening?

Your choice, but I’m going with Door Number Two. 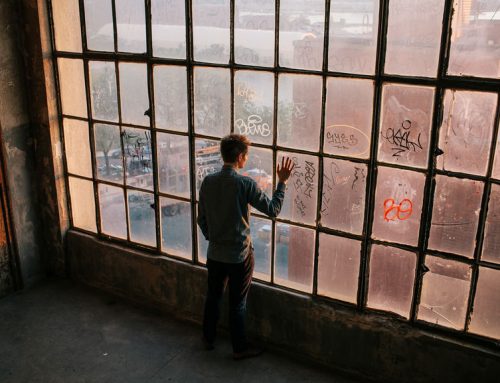